The Santa Clara county public health director is recommends getting a flu shot early this year.

The recommendation came after two deaths this month caused by influenza. An adult, younger than 65 with a chronic illness and a healthy child younger than 18 died from the flu. It’s believed the child likely contracted the flu while traveling outside the u.s.

So far this year across California, at least 20 flu deaths occurred between may and September, the flu’s off-season, according to the California Department of Public Health.

In health news… a warning from the state department of public health today: stop vaping until we find the cause of the mysterious lung illness linked to vaping.

Two people have died in California from the lung ailment and ninety Californians with a history of vaping are hospitalized. Doctor charity dean, the state top public health official says there are numerous unknown factors about vaping and until the investigation is complete… refrain from vaping.

Health officials are asking those who fall ill from vaping to save their cartridges, so they can be analyzed.

The heat is on! At least until 7 tonight when the Monterey County heat advisory is set to expire.

At 5 p.m. this evening the temperature in the city of Monterey was hovering at 90.

But it looks like the hot stuff may be on the way out. By tomorrow we are expecting a cooling trend with the return of the marine layer and temperatures cooling by more than 10-degrees… by the weekend we’re in the mid 60’s.

Plan ahead Capitola drivers… more roadwork may cause you some delay.

Wharf road from Cliff Drive to Capitola Road will be subject to road closures between 8:30 in the morning til 4:30 in the afternoon thru October 16th.

Stockton Avenue and cliff drive will both have closures between the same hours but only until October first.

The trench excavation, new pipe installation and manhole installations are all part of the sewer Capitola improvement project.

Two local airports are set to get a makeover. The department of transportation awarded the Monterey peninsula airport over five-million dollars for runway safety improvements.

The Hollister municipal airport also received over five million for taxi-way construction. No word yet on when construction for the improvements will begin. 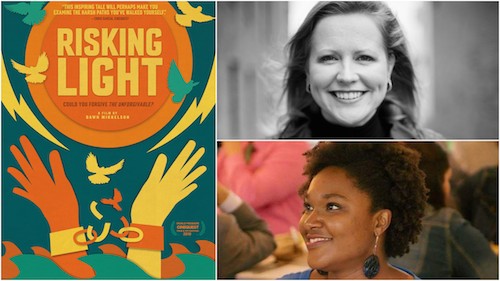 How do your forgive abuse, murder, or genocide? Ruth Copland features two special guests on the topic of forgiveness - film-makers of the documentary 'Risking Light’, which features the stories of three people, in very different circumstances, who forgive the absolutely unforgivable. These people had the courage to step out of the haunting, tragic darkness of the past, risking everything to reach the light of their own compassion. How did they do it and why? The film 'Risking Light' explores resilience, and the painful process of moving from grief to compassion and forgiveness. It challenges us to ask “What would the world look like if we could learn to forgive one another?”
Ruth Copland's guests are Dawn Mikkelson - 'Risking Light' Senior Producer, Director, Writer, and Editor - and Miranda Wilson, 'Risking Light' Producer.

In the topic hour Ruth Copland consider topics with local relevance and global significance. The idea is to get us thinking about the questions that affect us all - to stimulate new thinking, or clarify what we already feel; to hear how other people’s opinions may differ from or be similar to our own.