A multiple car pile up closed both southbound lanes of Highway 101 in San Martin on Friday. According to the CHP traffic was diverted to frontage roads while 10 vehicles were removed from the roadway. The freeway was reopened to traffic at about 2 p-m.

The Monterey County District Attorney's Office has officially charged the man suspected in the highway 101 vehicle attacks. 52 year old Charles Kenneth Lafferty has been charged with nine felony counts of assault with a deadly weapon.  The charges were made because the CHP has been able to link Lafferty to nine different vehicle attacks between February 2019 and January 2020. More charges are expected to be filed in the near future.

The Groundbreaking party for a new rail-and-trail is scheduled for tomorrow (Saturday).

Sally Arnold, chair for Friends of the Rail and Trail (FORT) told KSCO more about what this special event entails…

This groundbreaking ceremony will include speakers such as Santa Cruz city mayor Justin Cummings and Sam Farr. 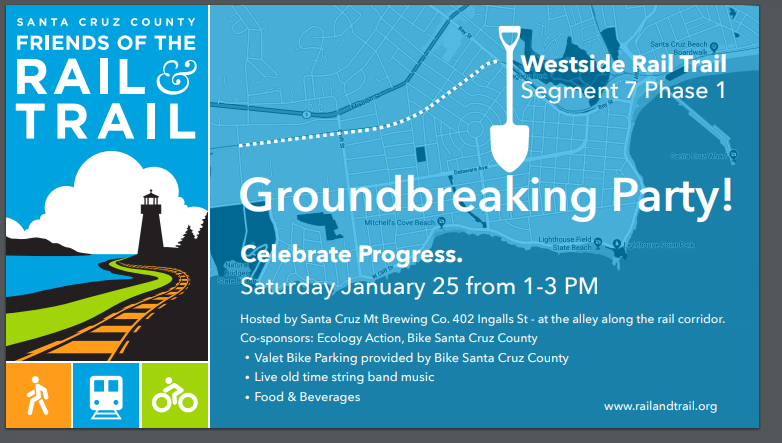 On Thursday, The California Legislature advanced a bill that would require manufacturers of toiletries such as wet wipes to have clear labeling of “nonwoven disposable products”.

This bill was introduced due to concern among environmentalists who worry the wipes could end up in waterways, as well as the municipal workers who have to clear sewage lines clogged with wet wipes.

While the bill has been weakened due to industry opposition, legislative staff anticipates the bill will strengthen with amendments over time.

The bill is pending a second reading follow the latest amendments.

This study commenced last November in partnership with the RTC and Santa Cruz Metro.

In the study is an evaluation on high-capacity public transportation options that utilize all or part of the Santa Cruz Branch Rail Line.

Members of the public who are interested in providing input on this study are encouraged to attend the open house February 11 at the Live Oak Grange, or at the Watsonville Library Community Room on February 12.

Those who cannot make it to these meetings yet want to provide input or wish to learn more can visit SCCRTC.org.